Stories From Sodor Wikia
Register
Don't have an account?
Sign In
Advertisement
in: Minor Characters, Other Railways, Electric Engines,
and 4 more

Étienne is a French electric engine.

Étienne competed in the Great Railway Show, competing in the speed competition. After Gordon was forced to drop out of the race, Étienne fought with Spencer for first place. Spencer nearly won, but the electric engine managed to pass Spencer at the last second, winning the race and setting a new world rail speed record.

After the Great Railway Show ended, Étienne left the mainland and went back to France.

Étienne is described as being polite and gentlemanly, as he only joined the Great Railway Show to have fun and meet new friends.

Étienne is based on SNCF's BB 9003 and 9004 electric locomotives, built by Jeumont-Schneider of Paris in 1952 and 1954, respectively. 9004 has been preserved and is on display at the Cité du Train in Mulhouse.

Étienne is painted white and dark blue with red and silver lining and red wheels, the colours of the French flag. He carries his name on a silver nameplate. 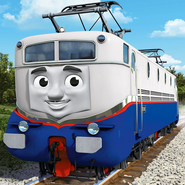