Stories From Sodor Wikia
Register
Don't have an account?
Sign In
Advertisement
in: Characters, Steam Engines, Tank Engines,
and 5 more

Atlas was built at Jouef Decauville, in France circa 1899. They were shipped to Sodor and purchased to work at the mines of the Mid Sodor Railway.

No information was given about the fates of these engines when the mines and railway were later closed. It can be assumed that they were either scrapped or sold.

In the twelfth season, Atlas was bought by the Skarloey Railway. Upon arriving there, he was reunited with his old friends Duke, Sir Handel, and Peter Sam[1]. He now works mostly at the Blue Mountain Quarry.

Atlas's model was built by the Rev. W. Awdry to OO9 scale. He is based and modelled on the Jouef Decauville Type 1 0-4-0PT locomotive, without a cab and with a shorter funnel. 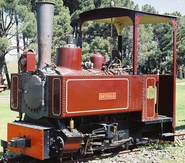