Stories From Sodor Wikia
Register
Don't have an account?
Sign In
Advertisement
in: Characters, Minor Characters, Nonrail Characters,
and 5 more

Elizabeth is a vintage Sentinel steam lorry, formerly owned by Sir Topham Hatt. She often works alongside the Skarloey Railway.

Prior to becoming the controller of the North Western Railway, Sir Topham Hatt owned Elizabeth - she noted that he was not the best driver. For unknown reasons, Elizabeth was shut up in a shed and remained there until Thomas' crew found her several years later when they needed urgent transportation to the Works for new side rods. Jem Cole restored Elizabeth and she is to this day in perfect working order.

When the Skarloey Railway was facing hardships, Elizabeth agreed to help the narrow gauge engines clear the line of fallen branches and restore the line, which they succeeded at.

One winter, when Thomas refused to wear his snowplough, Elizabeth scolded him, stating that he could not be reliable without it. She was given the task of taking puddings to Brendam Docks for delivery to the Mainland, but during the trip, she slid on the icy roads and got herself stuck in a snowdrift. Thomas and Terence rescued her and they managed to deliver the puddings in time before the ship left.

Jacob and Friends:All Grown Up

Elizabeth does not like laziness, carelessness or rudeness and will respond to these characteristics in the strongest terms. Because of this, she can often come off as harsh and severe.

Although she believes roads are superior to rails, she often helps the engines out. She is very sensitive about how others refer to her by her age.

She has a special fondness for her former owner Sir Topham Hatt and it seems that even he never seems to take offence or get angered by her strong statements when she criticised the way he drives. She has also been shown to haqve a soft spot for Jacob, Sierra, and Kira, treating them almost as though she were their grandmother.

Elizabeth is based on a Sentinel DG4 steam lorry with a three-way tipper behind her cab. Isobella shares the same basis. 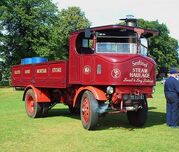 Elizabeth is painted maroon with gold and black lining and a brown tipper.