Ferdinand is a logging engine from Misty Island.

Ferdinand, Bash and Dash found Thomas on Misty Island and helped him collect Jobi wood to take back to Sodor. Unfortunately, Ferdinand and the twins ran out of oil while going through the Misty Island Tunnel. Luckily, Whiff and Percy were able to rescue Thomas, Bash, Dash, and Ferdinand and took them all back to Sodor. Ferdinand then helped with the completion of the Sodor Search and Rescue Centre along with Bash and Dash.

Ferdinand later helped Gordon deliver The Lion of Sodor to the Duke and Duchess of Boxford's Summer House.

In the sixth season, he, Bash, and Dash laughed at Jacob when he told them he was an engine driver. However, Thomas later talked t them and they apologized to Jacob.

Ferdinand is the gentle giant of Misty Island, where he works with twin engines Bash and Dash. Instead of burning coal, Ferdinand runs on wood and oil. He is bigger and slower than Dash and Bash, but will always endeavour to join in all the same. He may come across as the simpler-minded, quieter, or even more bashful engine of the three due to his tendency to often let the more boisterous Bash and Dash do most of the talking, but often manages to get in a comment of "That's Right!" during the trio's antics. Nevertheless, he is just as fun-loving, goofy, and whacky as the other two. He is considerate, inquisitive, has a big heart, and enjoys joining in and laughing along where-ever there are fun and games to be had.

Ferdinand is painted teal with grey lining. He has a semi-circular symbol depicting three yellow trees with two brown axes crossing each other on both sides of his cab and tender. 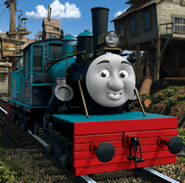 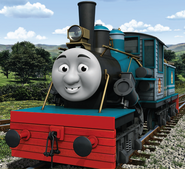 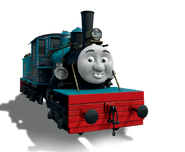 Add a photo to this gallery
Retrieved from "https://storiesfromsodor.fandom.com/wiki/Ferdinand?oldid=10034"
Community content is available under CC-BY-SA unless otherwise noted.