Ffarquhar Quarry was founded in 1924 when Jabez Croarie, principal landowner in Ffarquhar who, feeling the pinch after the First World War, floated the Ffarquhar Quarry Company to mine the stone under his land on Anopha Fell and in furtherance of this, persuaded the North Western Railway to extend their branch line from Elsbridge to Ffarquhar. Money was short and the railway would only extend if the Quarry would supply the stone for the required Viaduct free of charge. Jabez, wanting an attractive structure to show potential customers the quality of his stone, agreed.

The Elsbridge Viaduct was completed in 1925 and has since needed only minimal maintenance, thus giving excellent testimony to the qualities of Ffarquhar stone, which has since found a ready market both on Sodor and elsewhere. When first quarried it is easily worked, but after a curing period above ground it becomes very hard and impervious to weathering and air pollution. It is specified widely for municipal and other public buildings, as well as for bridge and harbour work.

The Quarry is 1½ miles from Ffarquhar and some 250ft higher; it is reached by the Quarry Tramroad. The route was initially worked by the Coffee Pots, but they were found to be deficient in break power, so Thomas was sent up on occasion. On one of these trips in 1951, Thomas was booked by a young constable for not complying with a forgotten law, which was later found to be outdated, thus explaining why the old constable, who was a good friend of Thomas, had not stopped him beforehand. Regardless Toby was brought in to run the quarry traffic. Shortly afterwards, the young constable was transferred away and non-tram engines occasionally use the tramway again.

In the 1960s, to cope with increasing production, the Quarry Co. bought a Drewry diesel named Mavis, who not only shunts the quarry sidings, but also from time to time ventures down to Ffarquhar Station. In 1987, the Quarry Co. employed some 400 people either underground or at the cutting and curing sheds. These sheds were originally located at the quarry itself, but were later moved to near Ffarquhar Station.

Toby, Henrietta and Bertie take the quarrymen to and from the quarry, but unfortunately Bertie can only go up to the quarry gates and Toby and Henrietta had a hard time transporting the workmen. The problem was solved after Sir Topham Hatt renovated an old coach called Victoria and joined her with Henrietta and Toby. There are four passenger trains a day from Ffarquhar for workers at the quarry, while goods trains are run as required. There is only a platform and waiting shelter at the quarry.

Mavis, Diesel, 'Arry and Bert work here most frequently. A magazine fact file also states that Jack and Alfie work here. Den once briefly worked here while Mavis was under repairs. Stepney also briefly worked here. As well as mining quarry rock, there is a section of the quarry which mines slate. In Calling All Engines!, Edward had to sleep here until Tidmouth Sheds was rebuilt.

In the CGI series, Mavis, 'Arry and Bert permanently work here and Toby helps as well when he is not taking the quarry workers to and from the Quarry in Henrietta. Ryan and Daisy once had to help out during the busy summer months.

Edward and Jordyn had to stay at Anopha Quarry while Tidmouth Sheds and Knapford Sheds were being rebuilt. 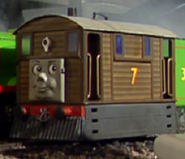 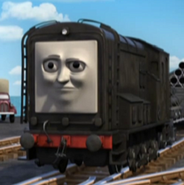 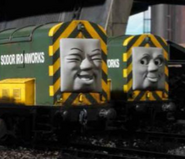