Stories From Sodor Wikia
Register
Don't have an account?
Sign In
Advertisement
in: Minor Characters, Steam Engines, 4-6-2,
and 3 more

View source
watch 01:40
The Sandman Will Keep You Awake - The Loop
Do you like this video?
Play Sound

Frieda is a big German engine who participated in the Great Railway Show. She was a contender in the strongest engine competition.

Frieda was present when she and the other international engines accidentally arrived on Sodor instead of the Mainland. When Thomas came to the Mainland to bring Gordon his safety valve, he mistook Frieda for Gordon. Frieda scoffed at this and puffed away to compete in the strength competition alongside Henry, Hiro, Vinnie and Shane, but the winner of the competition was left unknown.

After the Great Railway Show ended, Frieda left the Mainland and returned to Germany.

Frieda is a sleek, blue streamlined engine from Germany. Beautiful and strong, Frieda will be entering the Strongest Engine race. She has come to show to prove that anything the boys can do, the girls could do better. Frieda was a grumpy female engine, who doesn't smile so much, and didn't take mistakes so kindly. But when she realises that people are not cheering at her, Ivan told her to smile every day so that Frieda would get attention from people.

Frieda is based on the DB Class 10 built by Krupp in 1957. One of the two locomotives, 10 001 is preserved at the German Steam Locomotive Museum in Neuenmarkt-Wirsberg. 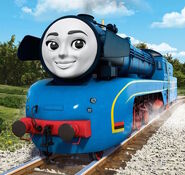