Jerry is one of the diesels that works on the Mainland.

During The Great Railway Show, Jerry, along with the other Mainland diesels were seen shunting trucks around the yard for the contestants; such as the heavy train for the Strength Competition[1].

Not much is known about Jerry, as he has yet to speak. 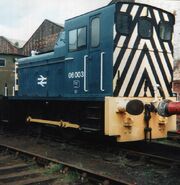 Jerry is painted light green with purple stripes. He also has purple buffers. He has his name on his side in dark green, as well as dark green coupling rods.