Logan is a steam shunter who looks like a diesel. He works at the Crosby Coal Company.

Logan arrived on Sodor on the day of the Sodor Talent Show and confused Edward and Gordon for one another, and mixed up their trains. Eventually, Logan realised his mistake and corrected it.

Gordon at first mistook Logan for a diesel. However, after a friendly chat, Gordon learned that Logan can be Really Useful. Later that day, Logan returned to his work at the coal mine a wiser engine.

Logan and Sam later returned to the Mainland after their work on Sodor was done.

In Logan Returns, he is purchased by Richard Hatt, and now has a permanent job at the Crosby Coal Company.

Logan is a rough and tumble, strong little shunter. He is very friendly and hardworking. When he had a mishap with Edward and Gordon, he quickly discovered the value of patience and how it is indeed possible to correct a mistake.

Logan is based on a Radstock Sentinel Shunter. He carries the number of the larger Two-Engined Sentinel No. 7109. Unlike either of his basis, however, Logan has a funnel..

Logan is painted light blue and yellow with hazard stripes on his bufferbeam. 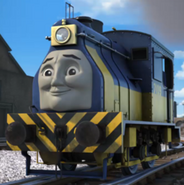 Logan's basis
Add a photo to this gallery
Retrieved from "https://storiesfromsodor.fandom.com/wiki/Logan_(steam_engine)?oldid=7752"
Community content is available under CC-BY-SA unless otherwise noted.