Emily to the Rescue

There have been several scrapped engines seen across Sodor and other railways.

These engines are seen around scrapyards on Sodor and they are mostly based off of models of existing characters. These included Thomas, Gordon, Donald and/or Douglas, and City of Truro.

Marklin is also one of these scrapped engines.

There was also a scrap model of Lorry 2.

The Old Tenders are based on Fowler and Thompson tenders. 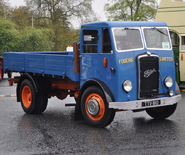