Sidney was one of the diesels who laughed at Percy's joke when the tank engine first arrived at the Sodor Dieselworks. He only appeared very briefly on a hoist with no wheels.

He was still there in the seventeenth season and was often referred to as a Christmas decoration by the diesels, literally being used as one by Diesel 10 as well. Percy asked how long Sidney had been left up on the hoist and found out from Norman that it had been two years. Percy gave Sidney a new set of wheels as a Christmas present, and Sidney is now a really useful engine again.

He, along with Diesel, Den, and Dart unwillingly hid from Paxton, whom then found them again at the end of the day.

In the second season, he helped explain the concept of Diesel Day to Rose, and later encouraged her to tell the other diesels about her life before she came to Sodor.

In Season 5 of Stories From Sodor:Future, Sidney tried to shunt at Vicarstown Yards before Fergus took over. He later helped Fergus back onto the rails by bringing Kevin.

Sidney is a bit of a forgetful engine. He starts his day at one location and ends up at another, not remembering how he got there. When it was his turn for repairs at the Dieselworks, he was hoisted up and had his undercarriage removed. Being patient, Sidney was happy to wait, and wait, and wait. He sat there happy to pass the time with any engine that happened to be visiting. Two years later, he still had no wheels, so Percy helped him at Christmas to get a new set of wheels and now he is back on track.

Sidney is painted navy blue with yellow lining and a warning panel under his face. His traction rods are painted red. 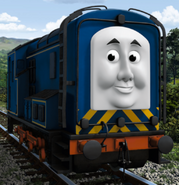 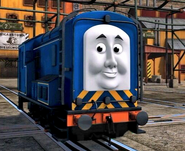 promo with Norman and Paxton
Community content is available under CC-BY-SA unless otherwise noted.
Advertisement