The Skarloey Railway is a 2'3" (Narrow Gauge) railway which runs from the North Western Railway's station at Crovan's Gate to Skarloey. Beyond Skarloey, the line continues to a slate quarry.

The railway is owned by Sir Handel Brown and is run by Mr. Roger Sam, son of the previous controller, Mr. Peter Sam (currently Mr. Percival in the television series). The line was inspired by and based on the Talyllyn Railway in Wales, where the Reverend W. Awdry worked as a guard in the 1950s.

In 1806, a plate way utilising gravity running from Ward Fell to Balladwail and connecting with the Sodor and Mainland Railway was opened. Following the modernisation of the Ffestiniog Railway in 1863, James Spooner was hired to plot a trackbed for a narrow gauge line. It was also planned to develop passenger traffic for tourists travelling to the springs at Skarloey, where there would be hotels and guest houses. Two steam engines were ordered from Fletcher, Jennings, and Co. and carriages from Brown Marshall.

The numbers of summer visitors dropped after signs of their copper traffic declining, but when slate was found a new source of traffic arose. After World War II, however, hard times had come and the mines had become ammunition dumps. Fortunately, tourist traffic increased after the discovery of the Book of Sir Harold at Ulfstead Castle, which revealed that Skarloey was his secret sanctuary, with archaeological evidence proving so. The railway was then able to purchase two disused engines from the aluminium works at Peel Godred for a total of fifty pounds.

In 1965, a loop line around Skarloey lake was opened to celebrate the centenary of the railway.

In the Railway Series, the Skarloey Railway starts at Crovan's Gate. It passes under a road bridge by the Thin Controller's house. Some thirty chains beyond the bridge the line climbs sharply before levelling out for the last mile to Cros-ny-Cuirn. This is the stretch where Duncan came off the rails. Before Cros-ny-Cuirn, the line goes to a crossing located by Mr Hugh's Cottage (seen in the last illustration of Home at Last). Just north of the station the line swings over the road in a level crossing (incorrectly illustrated as a road bridge). Road and rail run side by side for two miles (where Sir Handel and George had their incident) till first the road and then the railway swing west across the river. When road and rail divide, the road dips sharply, and swings west (Sir Handel is seen there in Home at Last) to cross the river by a hump-backed bridge. The railway, without change of gradient, crosses by a girder bridge (Skarloey is seen crossing this bridge in Home at Last). Two miles of lonely moorland follow. It was here that Rheneas' valve gear jammed. After a mile and a half, the line reaches Glennock.

Beyond Glennock, the line swings north once more through arable and pasture land, passing scattered cottages and farms. From each house there is usually a well marked path leading to a stile or gate in the lineside hedge (Skarloey is seen passing it in Old Faithful). These are unofficial, but traditional Request Stops for certain trains and are well used on Market Days (Skarloey is seen here in Skarloey Remembers). It was on this stretch, that Skarloey in 1865 "bounced" the Manager off the footplate into a bush. Still gently climbing, the line crosses the river again by another girder bridge, and enters to a tunnel. North of the tunnel the line runs along a ledge, and is subject to "wash-outs" after heavy rain. Here, Peter Sam's crew found a drain pipe along the line. The line crosses the Viaduct, until it reaches Rheneas.

After Rheneas, the line comes to Lakeside Junction (also named Quarry Siding), where the loop line was opened. The loop line runs round and above the lake on a ledge cut in the hillside among the trees. There is one station, Lakeside, which serves a picnic area. The line ends at the top station at Skarloey. Beyond there are a run round loop, sidings, locomotive and carriage sheds.

Passing a tumble-down gate (where Sir Handel came off the rails), the line reaches the slate quarries.

The line's main traffic consists of passengers and slate.

The Skarloey Railway was originally used to transport copper from the Ward Fell mines until 1909 when the copper veins ran out. Luckily, in 1900, good slate had been found in the foothills and was mined until the end of World War I when production slumped. Nevertheless, the quarries were kept open by Sir Handel Brown I for the sake of his tenants. During World War II, the Ministry of Defence commandeered the mines for use as ammunition storage/dumps.

‎In the television series, the Skarloey Railway is considerably expanded. It starts at Crovan's Gate near the Steamworks and follows the Railway Series route until the loop around the lake. A branch then continues west from Skarloey to the Blue Mountain Quarry and then crosses the Peel Godred Branch south of Kirk Machan. After crossing the line it terminates in Ulfstead where it connects with the private railway at Ulfstead Castle. Here it connects with the Ulfstead Branch Line. It also has a branch line that separates from the main line in-between Glennock and Rheneas that runs to Vicarstown. Stepney's Branch Line also works alongside it. 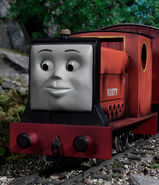 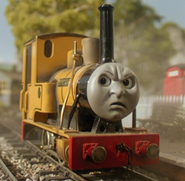 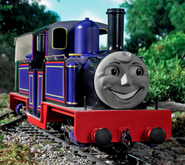 Engines #1 - 7, Mighty Mac, and Harold
Add a photo to this gallery
Retrieved from "https://storiesfromsodor.fandom.com/wiki/Skarloey_Railway?oldid=13488"
Community content is available under CC-BY-SA unless otherwise noted.