South of Killdane, Island of Sodor

The Sodor Ironworks, also known as the Sodor Steelworks or the Smelter's Yard, is a special company that serves the Island of Sodor. 'Arry and Bert work here.

The Sodor Ironworks is a large metal foundry, where scrap is delivered, melted down and repurposed. It is located south of Killdane, on the Killdane Branch Line.

The main building on the site is a large warehouse known as the Smelter's Shed. Inside the shed are a number of different tracks, a turntable, the manager's office and a large claw known as The "Grabber".

The outside of the ironworks is littered with twisted pieces of scrap metal, including those of old steam engines. Because of this, many of the engines find the Ironworks to be rather spooky, especially so during the night, when falling sparks illuminate scary shadows inside the shed.

When Stepney accidentally got lost, he wound up at the ironworks. 'Arry and Bert, the Ironworks' resident diesel shunters, attempted to scrap him using the "Grabber", but were fortunately stopped just in time by Sir Topham Hatt.

In Calling All Engines!, Henry and Percy had to sleep in one of the sheds here, due to Tidmouth Sheds being rebuilt. 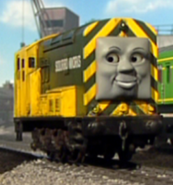 Bert
Add a photo to this gallery
Retrieved from "https://storiesfromsodor.fandom.com/wiki/Sodor_Ironworks?oldid=18281"
Community content is available under CC-BY-SA unless otherwise noted.