The Sodor Search and Rescue Centre is the home of Harold, Rocky, Captain, Butch, Belle and Flynn. It is located along the coast south of Maron and east of Suddery on the Main Line Loop.

It has a helipad for Harold, a shed for Rocky, Flynn and Belle, another shed for Butch and a dock for Captain.

Belle and Flynn officially joined the team in the special, Day of the Diesels. 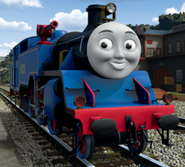 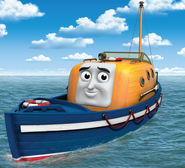