The North Western Main Line travels from Barrow westward to Tidmouth through southern Sodor. It is approximately 80 miles long.

The main line starts from the English town of Barrow-in-Furness. Crossing over the rolling lift bridge across the Walney Channel, the line calls at Vicarstown before passing through Henry's Tunnel. After this, the junction to the Norramby Branch Line is reached. The line passes a line after this, where Gordon's birdstrike incident happened. Also, in the television series, after passing through the Ballahoo tunnels and going past the junction to the Norramby branch line, there is a line that branches off the main line leading to Great Waterton which is nestled in between Stepney's Branch Line and the main line.

The line crosses River Hoo, and after that it calls at Crovan's Gate, home to the Works and the Skarloey Railway. After stopping here, the line crosses Ben Glas. Then it passes the place where Henry was stuck in the snow and was rescued by Donald and Douglas. Later comes the place where James' train brakes were mended with bootlaces. The line travels to Kellsthorpe Road, junction to the Kirk Ronan Branch Line. After that, it comes to the place where runaway James was caught by Edward. Crossing a bridge over a road, it comes to the stretch of line where Toby ran out of water. Later comes the bridge above Hawin Russagh. And the line afterwards reaches Killdane, junction to the Peel Godred Branch Line.

Cronk is next, and once leaving the station, trains cross a viaduct, and then arrive at Maron, junction to the Ulfstead Branch Line in the television series. Trains then descend Gordon's Hill and pull in at Wellsworth, the junction to Edward's Branch Line. The Cow Field is next, then trains arrive at Crosby, then the cow field where Edward's train was broken by some cows. Trains later pass through a mile-long tunnel, and then stop at Knapford, the junction to Thomas' Branch Line. Crossing another tunnel, the main line terminates at Tidmouth, home to the headquarters of the North Western Railway and the main line sheds. The junction to Duck's Branch Line is here as well.

The main line carries several kinds of freight, including ballast, lead, zinc, silver, slate, bauxite, produce, building stones and fish, including the Tidmouth kipper, which is considered a delicacy. Tourism is a major part of the passenger traffic during the summer season, as Sodor has many beautiful lakes, mountains, and other beautiful scenery. The main passenger traffic is commutering, with either stopping trains that stop at all main line stations or the "Wild Nor' Wester", the railway's express, which stops only at the Works station before reaching the Other Railway.

In the television series, there is a loop of the line between Maron and the Whispering Woods. 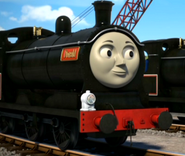 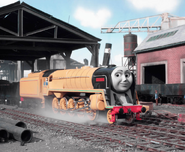 Philip
Add a photo to this gallery

Jerome and Judy
Add a photo to this gallery
North Western Railway
The Main Line
Retrieved from "https://storiesfromsodor.fandom.com/wiki/The_Main_Line?oldid=11059"
Community content is available under CC-BY-SA unless otherwise noted.