Stories From Sodor Wikia
Register
Don't have an account?
Sign In
Advertisement
in: Landmarks, Other Railways, The Mainland,
and 8 more

The Steelworks is a large industry on the Mainland which produces steel.

Hurricane, a large tank engine, and Frankie, a diesel shunter, were the only permanent residents and workers of this massive industry. Their duties include emptying slag, arranging trucks and making deliveries, presumably often to Bridlington, as Hurricane said, "I deliver goods there all the time!"

It could be assumed from Frankie saying "Thomas is my favourite new engine." that the two of them force visitors to stay and work with them on a regular basis (presumably via singing the welcoming song "The Hottest Place in Town"). No matter how many of them were captured, however, they all seem to have managed to escape.

The most recent skirmish of the steelworks occurred after the arrival of Thomas, who trespassed into the steelworks by mistake as he was lost on his way to Bridlington Goods Yard. After persuading the unknowing tank engine into leaving his trucks, Hurricane and Frankie performed the welcoming song. That, plus Hurricane informing Thomas that he delivered his trucks during the night, were enough to convince Thomas into working hard at the steelworks all day.

However, after Hurricane and Frankie left on a delivery, a homesick Thomas attempted to escape via a track leading into the woods. This resulted in his own derailment, and a reprimand from Frankie and Hurricane once they returned and rescued the tank engine.

That didn't stop Thomas from making further escaping plans. When Hurricane and Frankie were fast asleep, Thomas tried pushing the steelworks gates open during a thunderstorm one night. When that failed, he found some flatbeds loaded with pipes and rails for his aid in crashing open the gates, hoping the thunder would conceal his escape. This woke Hurricane and Frankie, but by the time the two of them set chase, Thomas had already succeeded in bashing himself free. After a brief chase, the two Steelworks engines gave up the search, because Thomas had turned off the main line and hid in a siding to be saved by Merlin.

Later that morning, Hurricane went to Bridlington again, where he heard James inquiring about the whereabouts of Thomas and info about himself. Somehow, he managed to lure James back to the Steelworks, where they performed their welcome, but were stopped abruptly by James demanding on revealing where Thomas is. The two originally tried to play dumb on Thomas' name, but after realising James knew about Hurricane delivering his trucks, Frankie made up that Thomas would return soon, and they forced James into working while waiting for him.

However, Thomas soon arrived back at the Steelworks with the experimental engines Lexi, Theo, and Merlin to rescue James. In the confusion that followed, Thomas nearly was dropped into a large cistern of molten slag before being knocked away to safety by a large bucket, and some of the cars full of molten slag led to Hurricane having part of his wheels melted after shoving Thomas out of harm's way. Merlin saved him after that, preventing more damage. After Frankie broke down crying and confessed the truth to everyone about how difficult it was for her and Hurricane to handle the work at the Steelworks on their own, Thomas suggested that the experimental engines could aid Frankie and Hurricane from then on.

With things mended between them and the engines from Sodor, Frankie allowed James and Thomas to return home while Lexi, Theo, and Merlin worked at the Steelworks with her until Hurricane was fully repaired and returned to work with them, allowing all five engines to work together to make the work much easier. 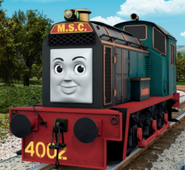