Stories From Sodor Wikia
Register
Don't have an account?
Sign In
Advertisement
in: Characters, Minor Characters, Road Vehicles,
and 4 more

Trevor is a dark green traction engine that resides at the Wellsworth Vicarage Orchard. His driver is Jem Cole.

Trevor used to work on farms doing odd jobs like threshing corn and sawing timber, but his owner thought he was old-fashioned and sent him to the scrapyard. Edward luckily befriended him and convinced The Vicar of Wellsworth to purchase him. Trevor now lives in the Wellsworth vicarage orchard, but is often borrowed by his driver Jem Cole to do odds jobs and to appear at various events such as steam fairs. Sometime after that, Trevor soon had no work to do, so Edward took him to Thomas' junction, where Thomas took him to work at Knapford Harbour. At the end of the day, Thomas took Trevor back to the junction and tells him that he may visit him sometime and that the vicar now has work for him to do in the orchard, but may be needed at the harbour again someday.

Edward and Trevor once helped the vicar organize a garden party to raise money for a seaside trip for underprivileged children.

Later on, Trevor has been seen working in other places such as Farmer McColl's Field. He has also got a cart stuck twice on a level crossing, both times the load being smashed apart by the oncoming engine.

Trevor helped clear the runway at the Sodor Airport after Emily brought him there.

He was an attraction at the Sodor Steam Fair, and was later seen at a fair at Maithwaite.

Trevor is very friendly and gets along well with the engines. He is also helpful and ready to give anybody advice. Trevor loves children in particular, especially giving them rides in his cart.

Trevor is based on a William Foster and Co. eight-ton traction engine built in 1927. 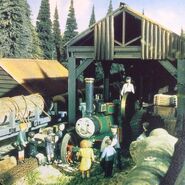